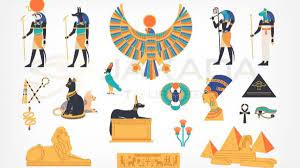 Learn All About The Significance of Protection Symbols in Egypt

We’ve all heard of protection symbols and always wondered what they are, right? Well, protection symbols are different signs that are used by people from all over the world to protect themselves against evil. This also includes protection against negative energies and vibes. When individuals don’t feel safe against physical protection, they shift towards supernatural rituals, including protection symbols.

In this article, we are going to have a look at different protection symbols and crystals, their history, significance, and how to increase their power, I reached out to the Karma & Luck crystal experts for the information I am about to provide you, and may I just add how great their vibe is! They are so serene, tranquil, and spiritual. So let’s dig in!

The Concept of Amulets in Egypt

Egyptians also wore amulets to ensure the well-being of the dead. These were worn in the form of rings, necklaces, piercings, and different sorts of jewelry. These amulets were worn by the Egyptians to benefit their afterlife. They were worn as headrest amulets, and some were placed in their tombs. Moreover, the amulets also symbolize the deceased rising and waking up from the dead. These were even placed on mummies and in between their bandages. They were mostly wrapped in the linens of the mummy’s chest burial. The amulets for the dead in Egyptian culture are called ‘Four Sons of Horus.’ These were actually a must requirement for the mummies.

The Egyptians also believed that an amulet’s magic could easily be understood by having a look at its shape. If you want to get your hands on beautiful, unique, and effective amulets, get them from Karma & Luck. Their one-of-a-kind amulets enable people to break the shackles of day-to-day life and truly encompass what they feel within. Moreover, they also had a firm belief that different materials that would be rubbed on the amulet would result in increasing its power. In the culture, both the rich and the poor wore amulets.

The Evil Eye in Egypt

The Evil eye, which is an object from an Egyptian cartonnage, is from an Egyptian statue. The eye played a huge role in Ancient Egypt and was known to be one of the most powerful symbols of all time. It was mainly used to keep one safe from evil. The Egyptians also believed that it used to reflect the evil back to the evildoer. During ancient times, sailors used to paint the evil eye on their ships, hoping that it would keep them protected during their journey.

In Egyptian mythology, the evil eye is associated with the god Horus, who is known to be the god of the sky. In their religion, they believe when the father and the king of gods, Osiris, died, Horus and Set, which is the god of the desert, fought with one another to take the throne. During the fight, Set took out Horus’s left eye, and he then gave his eye to his father Osiris, hoping that it would bring him back to life. Since Horus sacrificed his eye for his father, the eye was symbolized in healing and protecting Egyptians.

There are many different types of Protection Symbols out there. All of these symbols are known to be unique in their own way. Some are known for protecting one, some for peace, while some are there to treat one.

The triquetra is known to be an ancient protective symbol and has another name, ‘Trinity Knot.’ It is a triangular symbol that comes with three interlaced arcs. The shape can also be seen as three overlapping vesicae Piscis lens shapes. The symbol was used during the Bronze period in Europe and other Asian regions as well. The meaning of the symbol is Three corners and is a symbol of Celtic origin.

Here we have another protective symbol that is a turtle. Turtles, in general, have a very long lifespan, and that is why people consider them to be lucky for them. The turtle also comes with a hard shell which is a sign of strength for some people. Turtles are small creatures, and people from different regions believe they are quite lucky for them; hence their symbol is known as a protective one. In general, turtles are known to be a symbol of strength. It lets people believe that they can easily overcome any obstacles that they might face in life.

Also, it is known that there were loads of turtles in the Nile River in ancient Egypt. This is why the Egyptians thought of them as something that could get rid of evil. They started thinking of them as sacred beings and wore turtle amulets to keep themselves protected. This was done by all of Egypt.

Helm of Awe is known to be a protection symbol in Norse mythology, and its meaning stands for terror. In general, the symbol was basically used to provide protection against enemies and rebellions. Mainly The Vikings used to paint the symbol on their foreheads whenever they were going to the battleground for good luck and to make sure that they won against their enemies.

This is the most common symbol that has been used worldwide till now. It is a protective symbol that originated from Turkish culture. Nazar is derived from Arabic, which means sight, attention as well as surveillance. The word Boncuk is known as a bead in Turkic. The symbol is an evil eye in color blue and white and comes in the shape of a bead.

In the past, arrows were used as protective symbols for protecting one from any sort of harm that might come their way. The symbol is mainly used to represent protection as well as defense from any evil or negative sources. When it comes to the meaning of the arrows, it changes according to the direction of the arrow. For instance, an arrow that faces the right or left side is known to symbolize protection. On the other hand, an arrow that faces downwards is known to symbolize peace.

All of us feel vulnerable and weak at times. It doesn’t matter what the reason is, there are times when we feel like we have no energy around us. This is where protective symbols play a role and help one out. As mentioned above, these symbols are there to help increase one’s power, keep them protected, and fill their life with positive energy.